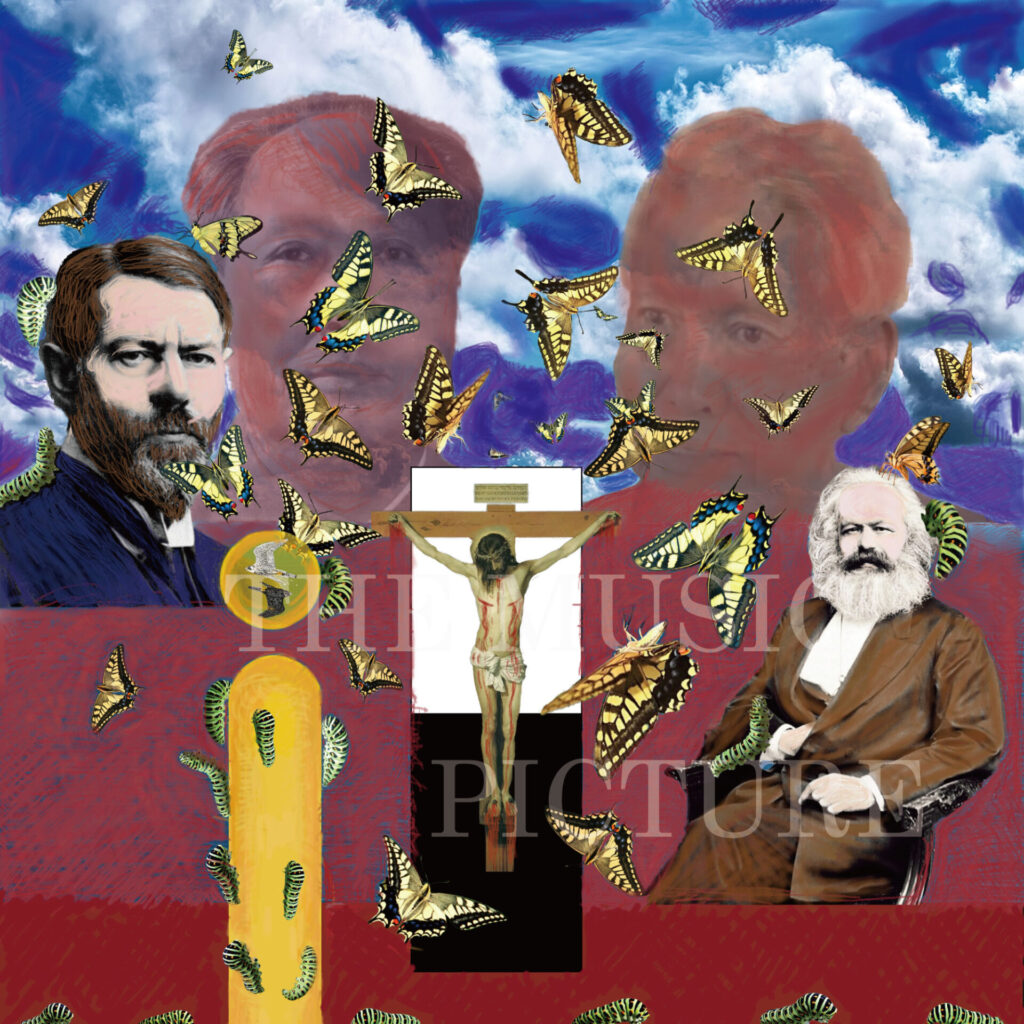 This art work was completed and posted on this site on October 26, 2021.

It's title is "The Struggle Against Dualism.

I would like to add a comment this time because the Russian invasion of Ukraine has occurred.

This work has become prophetic with the recent invasion of Ukraine.

I have not yet told you all the name of the person on the right side of the screen, have I?

On the left side of the screen is Mao Zedong. You all probably recognized this immediately.

On the bottom right is Karl Marx, the creator of scientific socialism = communism.

He is the man who created the ideas that formed the foundation of Lenin, who founded the former Soviet Union, and Mao Zedong, the founder of today's China.

And the upper left is Max Weber, an Austrian university scholar.

He explains why capitalism began in England in his book, "The Ethics of Protestantism and the Spirit of Capitalism."

He is the one who made a pessimistic prediction about modern society, saying that a huge bureaucratic organization, whether capitalist or communist, will be necessary in modern society,

but that the end result will be 'formed of rigid cog-like members who are devoid of heart and human emotion.

What do you think? It was right, in both Japan and Russia.

And the man on the right is Pol Pot who created the Communist Party of Cambodia, abolished circulating currency, and massacred about 1.7 million people, or 20 to 30% of the population, including those who died of disease or starvation.

Today, Myanmar's Commander-in-Chief Min Aung Hlaing is a man similar to him in character.

Many people think of Mao Zedong as the man who founded China and saved its people from starvation.

He is the man who slaughtered an estimated 20 million people in the Cultural Revolution, more than Soviet Union's Lenin and his successor Stalin and even Hitler, who slaughtered Jews.

Many scholars believe that these people are psychopathic psychopaths who are "incapable of understanding human pain" and are said to be the most common personality type of serial killers.

Now, int this art work the entire screen is red.

This is the blood of the people spilled in the massacre.

As I mentioned in my previous article, I was taught in college that the 20th century was a struggle between "Karl Marx, the scientific socialist, Sigmund Freud, the discoverer of the unconscious, and Darwin, the evolutionist," among others. The 20th century was a struggle against 'communists' and 'violence. I think this has become the prevailing view of contemporary thinkers around the world since the end of World War II.

What about the recent invasion of Ukraine?

Oh dear, the 21st century is also a struggle against "communists and despotism" and "violence".

As for Darwin's theory of evolution, it is the basis of white supremacy and white Australiaism. I think it is safe to say that.

The perception of whites that non-white races are lower animals in the process of evolving to become white.

This also seems to be what Putin is doing this time with the refugees who fled to Europe after the Syrian and Chechen invasions, where he did the same thing this time, and Europe is not accepting any refugees except Germany, and this time also refusing to accept black refugees, etc.

In Japan, politicians and the media have been almost completely indifferent to the Syrian and Chechen invasions and have refused to accept refugees.

How can these things be prevented by looking at this picture?

I created this work in the hope that each and every one of you who view it will research various information, think about it, and take the necessary action.

Follow @masahikoyokota1
おすすめの記事
Types of prints are explained. Famous artists and representative works of each type of print are also listed and explained.
This page explains the types of prints and their value and price as wo...
When I enter an university・・・" You have an excellent fine art talent and business sense"【My History No3 】
Before I enter Otaru University of Commerce ,I lost my way . Should I ...
kyoto 1945 August 6 AM 8:14:59
It is a picture completed on December 8, 2018 Because I used the comm...
Equipment used for giclee printmaking, printing paper, and asset value. Relationship with emerging new technology NFT.
Hello.   I'm Masahiko Yokota, a pastel painter and digital artist from...
High school days  Art teacer said “I found a genius painter at last today【My History No2 】
I choose industrial arts class by the club activities of the high scho...
【About My Resume Introduction】 How a genius boy of painting was recognized as a "world-class talent" by Japan's leading contemporary art dealer.
How did a natural-born "genius boy of painting" come to be regarded b...
February 11, 2021 My latest picture has been completed. The title is "God is Dead! "
I hope you will think of it as a pastel painting. I made a poem about ...
This is a partially enlarged view of my latest pastel painting "The Flower of Snow.
Hello. I am Masahiko Yokota. This is a partially enlarged view of my l...
MY GICLEE PRINTS ONLINE SHOP
THE PURCHASE OF PASTEL ORIGINAL DRAWINGS AND LARGE SIZE GICLEE PRINT
CONTACT
Let`s Try・・・High-performance translation software using AI