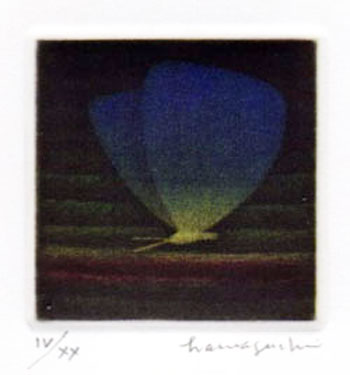 As prints are reproductive art, many people wonder if they have the same asset value as paintings.

Printmakers such as Masuo Ikeda (池田満寿夫）and famous photographers such as Hiroshi Sugimoto（杉本博司） and Sanehana Abukawa （虻川実花）are not viewed as artists any lower in the art world than painters and sculptors.

However, Printmakers and photographers do not create one-of-a-kind works of art like paintings and sculptures.

So what do they sell?

Prints and photographs are sold in a limited number of copies. For example, a limited edition of 100 copies. The artist signs his or her name and serial number in the margin space.

How many times do you print in this limited edition of XX copies? First edition or second edition? , and the serial number is called the edition number.

For example, each Picasso painting sells for an average of 100 million.

Yozo Hamaguchi, who was known as the Picasso of the etchings world, printed 100 copies of the first edition for each of the original plates, and sold them for 1 million yen each.

The result is the same: 100 million yen goes to the artist.

As time goes by, especially when the artist passes away, the price of his works will increase because no more new works will be released to the world. .

This is the same for both photographs and prints.

Therefore, what determines the value of a print is how much brand value does the artist have? Is the signature authentic or not?

How many times it was printed and how many prints are there? That's what it's all about.

It's the same with giclee prints. .

As you can see, prints are much more affordable and accessible for art collections than paintings or sculptures. .

Therefore, it is recommended as an introduction to art collection.

Where can you buy it?

So, where should you buy prints that are valuable assets?

Works labeled as silkscreens or lithographs by artists such as Hiro Yamagata and Lassen are completely unappreciated by the art world, which is headed by the Gagosian Gallery in the US.

However, if you like them and want to buy them and display them in your room, that's your own taste, and there's nothing wrong with that.

Recently, however, the number of giclee prints (printed with pigment ink) has been increasing, but there are also prints printed with dye ink or offset printing of photographs, and there are concerns about their light resistance.
(Reference page: the website of Art Alex Gallery Japan, which deals with prints by Lassen and others)

Even if you hang them in your room, they might not last more than a few years, depending on the environment, and they might get tanned, discolored, or deteriorate.

Hence, the reproductions of these artists have zero asset value.

Inks for etching and lithography are also not very light resistant, especially the older ones. 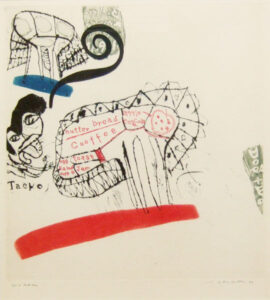 Incidentally, the only domestically produced paints for copperplate engraving are made by Bunbodo Japan(文房堂 ※note1), a long-established company that sells oil paints.

Therefore, we should be very careful about keeping our precious prints and pastels in the room at all times.

Now, the prints of Redon, Albrecht Dürer, Hamaguchi Yozo, Hasegawa Kiyoshi(長谷川潔) and IKeda Masuo（池田満寿夫） have a high property value, and their valuation and price are already almost fixed.

But there was a time when they were young when they were selling their prints, and it goes without saying that, just like stocks, the people who bought them at that time benefited the most from the price hikes.

Because of this, Hozu Yamamoto(山本豊津), the representative of Tokyo Gallery（東京画廊）, says that this is a method of purchase that Japanese people are not good at and that Westerners are good at, but for stocks, paintings and prints, the wisest way to buy is to buy works by promising artists who have not yet been evaluated.

In other words, there is no difference between buying paintings and sculptures and buying prints.

However, in Japan, Taka Ishii Gallery（タカイシイ・ギャラリー） has dealt with many works by photographers such as Hiroshi Sugimoto and Nobuyoshi Araki(荒木経惟), while Sirota Gallery（シロタ画廊） and Yoseido（養清堂） in Ginza （銀座）Japan are long-established galleries specializing in prints.

Therefore, I think it would be a good idea to gather information about these galleries first, and if possible, actually visit them and talk to the staff.

The photo shows Masuo Ikeda's "Taeko's Breakfast（タエコの朝食）" (drypoint etching), which won the International Grand Prize in the print category at the Venice Biennale in 1966.

Even in the 1980s, when Masuo Ikeda became a celebrity, you could buy it at Bancho Gallery（番町画廊） in Ginza for about 300,000 yen.