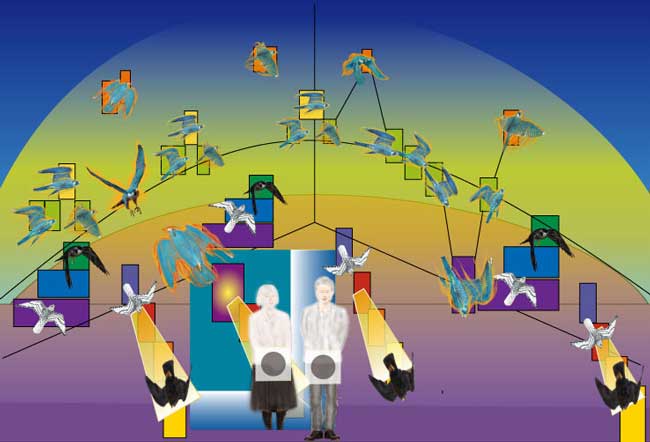 If you're a native speaker of a language other than English, you should definitely use DeepL translator.

Like the Poincaré topology, my discovery of the theory of translating music into painting is one of the greatest innovations in art history!

Today's contemporary artists, art dealers, curators, and collectors still don't understand the exact purpose for which abstract painting came into being, since the mainstream of art moved to the United States after the Second World War.

The reason for the birth of abstract painting was to 'give the power of music to the painting as well, in order to move the observer more strongly and deeply.

He created it inspired by the paintings of Monet and the music of Wagner.  Note 2

Together with his colleague at the Bauhaus in Germany, Paul Klee, an accomplished violinist and musician from a musical family, Kandinsky promoted abstract painting for musical expressive effect. (Note 3)

The constructivist abstract painter Albers, who went to New York to teach at Black Mountain College.it was not Kandinsky.

Albers played a minor role at the Bauhaus compared to Klee Kandinsky, the international star of German art.
He did not seem to understand the work of both artists accurately and was unable to convey to the young artist the essence of the study of abstract painting, the "realization of the musical state of painting".

As a result, the mainstream of abstract painting was not inherited by anyone in America. (Note 1)

This is why the contemporary art world, with a few exceptions, is still confined to two stereotypes

① Paintings and sculptures are works of art that are still and immobile, and the viewer is expected to stand in front of them and take a good look at them.

By the way, it is a truism that innovation, or "the creation of new ideas, inventions and discoveries," is, as James W. Young put it, "merely a new combination of things that were previously thought to be of a different kind.

For example, Steve Jobs combined the cell phone and the personal computer to create the iPhone, and Einstein discovered the Theory of Relativity by integrating "light, electromagnetic waves, space and speed".

It's exactly the same thing I've accomplished in the arts.

Since art is ”the art of place ”and music is” the art of time”, which had been thought to be impossible to integrateI. But I discovered the common law of exact proportionality between the spectrum of sound and light, and established a form of expression called the "The Music Picture".

And I discovered that when tonal music, such as popular music, is transformed into a painting using these rules, the image of a figurative landscape or figure that is the subject of the music always appears.

Finally, I have made possible the inter-translation of the three fields of art: tonal music, consisting of lyric and song, and painting.
This combination produces a more powerful expressive effect in the work of art, refining and purifying the content of expression by making the content of the poem and the song perfectly aligned.

This law can be easily applied not only to painting, but also to digital works of art such as team labs, theatrical art, music, animation, and film, allowing for dramatic advances in expressive effects in these areas in the future.

※（Note１）Thomas B. Hess : "The question was how is it possible to paint today? The great artists like Picasso, Matisse and Miró closed the door to them as soon as they painted.
It was impossible to follow them and become, say, a little Miró. ( Painters Painting: The New York Art Scene 1940-1970 Japan edition book  青土社 p65)

※（Note３）Paul Klee, an accomplished violinist, chose a career in art rather than music because "I wanted to pursue musical expression in contemporary art".
Klee said, "We can no longer paint like Michelangelo, partly due to physical causes like muscle and bone, but we can no longer paint like Michelangelo. We are experiencing things more abstractly than we used to. The painting of the future will be like music.