This page explains the types of prints and their value and price as works of art.

The following are the main types of prints that are commercially available and distributed.

Woodcut
A woodcut print is made by leaving only the area to be printed on the paper, applying paint to it, and tracing the paper with a baren.

Ukiyo-e is a genre of Japanese traditional painting、and this is a woodblock print. even with fine lines like human hair.

This photo's is Katsushika Hokusai "Thirty-six Views of Mount Fuji(葛飾北斎「富岳三十六景」)".

Katsushika Hokusai is the most famous ukiyo-e artist in the history of Japanese art.

Masuo Ikeda. Some kind of relationship, 1966

This is a technique of drawing on a copper plate with an iron brush called a needle. Paint is placed in these grooves and printed on paper.

The shavings of the copper plate that form around the stroke lines after engraving are intentionally left untouched, resulting in blurred lines.

This blurring creates shadows and shadows on the surface of the picture, and the result is an emotional work of art.

A representative artist is Masuo Ikeda, who won the Akutagawa Prize for his work "Dedicated to the Aegean Sea", won an award at the Tokyo International Print Biennale Exhibition, and overnight became a world-famous artist and TV personality.

This is a technique in which fine lines and scratches are first applied to the entire plate, and then the strokes are scraped off with a scraper or burnisher.

This creates a very soft impression on the background.

Depending on the strength of the scraped and polished areas, various tones of light, dark, and shade can be expressed, but this is a technique that requires a great deal of labor, time, and advanced techniques.

One of the representative artists is Yozo Hamaguchi, a leading mezzotint artist who is known as the Picasso of mezzotint.

It is possible to create delicate and subtle lines by varying the strength of the line depending on how long it is left in the corrosion inhibitor and its concentration.

Since the copper plate is not directly scraped, but rather the corrosion inhibitor (ground) is scraped off, the artist can draw quite freely and create works that are rich in delicate realism.

As a representative work, the pastel painter Odilon Redon highly praised it as "a work of art as suggestive as music, with lines like the dense and rapid tones of a fugue that shakes us" (Redon, To Myself, p. 19, Misuzu Shobo). Melancholia I" by Albrecht Dürer (photo).

Aquatint is a technique of sprinkling pine resin powder on a copper plate as a corrosion inhibitor, heating it to fix it, and then drawing.

The atmosphere changes depending on the particles of pine resin and the time of corrosion, so the shading of the surface is clearly visible.

Since the shades of black and colors become clearer, this technique can be used to create prints that look like ink paintings or watercolor paintings.

In Printmaking without cutting, lines are drawn on the plate with oil-containing painting materials such as litho crayon, and then the plate is chemically processed for printing.

Since there is no engraving, corrosion, or scraping of the plate, and the surface of the plate remains flat, this technique produces a print of the picture exactly as the artist imagined it. 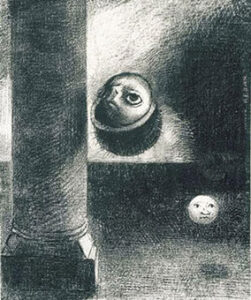 In lithography, a picture is drawn with a crayon on a flat piece of limestone, and then coated with gum arabic to which a small amount of nitric acid has been added to form a plate.

In the case of multi-color printing, the ink is applied to the undercoat.

In the case of multi-color printing, the colors of the underpainting are decomposed to create multiple color plates, which are then printed one on top of the other.

This is a technique that Picasso, Chagall, Matisse, and others were fond of because it produces prints that are very close to what the artist had in mind.

Department stores often sell prints by Ikuo Hirayama and Hiroshi Senju, and many of the works sold by these famous artists with their names and serial numbers signed in their own handwriting are lithographs.

A pastel painter who depicted the world of the unconscious, literary fantasies, and deep thought, Odileon Redon left behind many monochrome lithographs like the one shown in the photo before he began using pastels to create works of heavenly color in his middle age.

The photo shows "Ode to Goya," "4: There Was Also a Fetal Being," 1885, lithograph on paper, collection of the Museum of Modern Art, Kanagawa.

Stencil printing is a technique in which fine holes are made in the printing plate and pressure is applied to the ink placed on the plate.

Because the ink is poured from above, the original image is not reversed, which is very characteristic.

In the past, school teachers used to print tests and other documents on galley plates, which are also known as stencil prints.

Also, since it is not necessary to apply high pressure when printing, many plates and inks can be layered.

In silkscreening, holes are made in the silk (sometimes silk, sometimes nylon) stretched over a wooden frame to make a plate.

Since ink is dropped only in the holes, the ink is highly saturated, making it ideal for achieving monochromatic color surfaces, such as Matisse's cut paper paintings of his later years.

A representative artist is the well known Andy Warhol, who drew Marilyn Monroe and others in photographs.

He made prints of the dollar sign and gained popularity by claiming that the prints he made were just like bills. 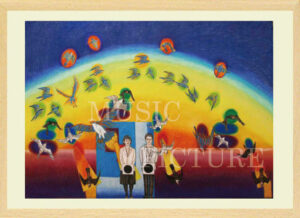 Giclee is a French word that means to blow and add color.

To put it simply, the original oil, acrylic or pastel painting is scanned by a digital camera or a large, high-performance scanner, and then printed on paper or canvas using a pigment printer.

Because they are made of rocks, they are resistant to discoloration by sunlight. I use a CANON PIXUS PRO 10 printer to print giclee prints up to A3 size, and the light resistance is 200 years according to the manufacturer.
(The photo is my giclee print and the original of "Firebird Phoenix" is a pastel painting)

Related pages "The Value of Prints as Works of Art. Where can I buy prints with asset value? "