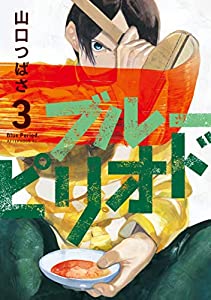 This is a recent favorite of mine,. A young man take and passed the entrance exam for the oil painting department of Tokyo National University of Fine Arts and Music（東京芸術大学 油画科）.
And i'ts describing his life as a student at it.

”Who do you think you are most like in the characters?"

He was asked, "Yotasuke Takahashi , isn't it?

I am the same way. In high school, I was a genius at drawing and thought of myself as a shy and reserved person.

But, It wasn't until I entered university that my friends pointed out that I had the exact opposite personality. (Laughs)

Now, what is the talent of a painter and contemporary
artist?

If you knew exactly what talent I had, would I feel comfortable going on to art school or art college and becoming a painter? In terms of risk management.

Is a young Picasso-like sketcher with great drawing ability a gifted painter?

If you are a genius sketcher like Makoto Aida（会田誠）, myself, and Aida's friend, Akira Yamaguchi（山口晃） of Mizuma Art Gallery（ミズマ・アート・ギャラリー）, who also graduated from Tokyo University of the Arts, （東京芸術大学）do you have excellent talent? 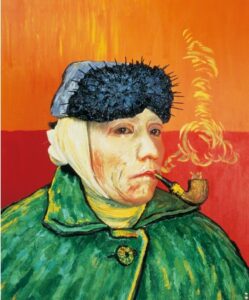 Yasumasa Morimura(森村泰昌), who is known for creating works of art that go into the paintings of Van Gogh and Velazquez, says that he was inspired to create such works because of his lack of drawing and production skills.

So, it is not that drawing skills are a necessity.

However, they do come up in Blue Period

This is also from the same book, but there is a rumor that the Faculty of Fine Arts at Tokyo National University of Fine Arts and Music always admits one student who is the top student in the subject examination every year, in the interest of ensuring student diversity.

Dessan can also imagine what a three-dimensional object would look like if he were to view it from above in the air, from the back, from the side, or from the ground.

This is an ability that architects, engineers, stage and film directors, and directors also need.

In other words, the whole and its parts can be grasped as a whole, and can be freely moved and simulated.

Does this not mean that if we work hard, we can become a person who is capable of systems thinking, which is one element of creativity, and design thinking?

In this light, it can be said that Leonardo da Vinci and Michelangelo were able to create such magnificent works of art because of their innate qualities and high drawing ability as a result of their repeated efforts.

Is your sense of color and aesthetic sense for form and line a talent? 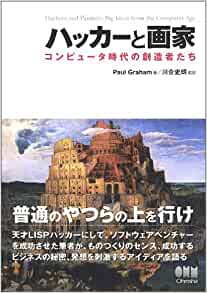 There is a well-known book"Hackers & Painters: Big Ideas from the Computer Age " (click on the picture for details).
It says, "A good painter is most like a hacker, or rather a genius programmer like Apple founder Steve Vozniak, Facebook founder Mark Zuckerberg, or the two founders of Google, Sergey Brin and Larry Page." The book is called.

He also says, "Design sense is, without a doubt, an aesthetic sense.

Aesthetic sense is a sensitivity to what is universally beautiful. 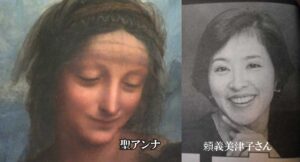 St. Anne and Mitsuko Yorikon （頼義美津子 A famous Japanese female announcer who passed away）Who do you consider beautiful? What do you find beautiful? It is.

However, monogamy, which is adopted in many countries, is only possible if” there is no accounting for taste”.

So, my wife, who is not a beautiful woman by any stretch of the imagination, is the most beautiful woman in our country! But such a person cannot be a da Vinci or Warhol.

So, was Marcel Duchamp aesthetically pleasing?

In fact, Yasumasa Morimura wrote the titled is 『"what is beauty .Recommendation of Art"(「美しい」ってなんだろう? 美術のすすめ」)

So there are cases where an artist whose work is seemingly distant from the aesthetic eye is very sensitive to "beauty" and deeply contemplative.

So, is aesthetics a necessity?

Talent as a contemporary artiste is the ability to produce.

After having considered the above, it seems to me that the talent of a contemporary artist is the ability to produce.

Simply put, it is creativity.

These days, creativity is defined as "the ability to create innovative and groundbreaking works, products, and services that surprise people. It also includes the ability to market the results and to make a profit from them.

Therefore, those who consider it despicable to sell their works and earn money, which is said to be the case with many students and instructors at art universities in Japan, are likely to be questioned about their lack of sense at that point.

Business is about "providing goods and services that the world needs or that change the world for the better.

Therefore, "an understanding of politics, economics, and various other ideas" is also part of his talent.

You can see that Banksy, who is now a hot topic, is also highly skilled in this aspect.

Isn't Gerhard Richter, one of the leading postwar German painters, also excellent in this respect?

So, do all successful painters have such logical thinking and intuition?
What about Mie Komatsu(小松美羽), the "too beautiful painter" who is selling well in Japan? Will she vote?

What about the mentally challenged, wandering painter, Kiyoshi Yamashita(山下清), the Japanese painter known as "The Naked General"?

Incidentally, according to an article in the morning edition of the Asahi Shimbun(朝日新聞), one of Japan's three major newspapers, Yoshitomo Nara(奈良美智) takes time to read all the major Japanese newspapers every morning.

I guess it depends on the type of artist whether he has these qualities or not.

I think the decisive factor is aesthetic intuition and aesthetic sensibility

I say on this site that "art is expression," and perhaps a serial killer can express his murderous demands in such a shocking and astonishing way that it will make you swoon.

Is a work of art that expresses the atomic bombs dropped on Hiroshima(広島) and Nagasaki (長崎)"with the intention that it was essential to prevent further deaths of American soldiers"?

What is the difference between the Maruki couple's (丸木夫妻)painting of the atomic bomb and this work?

After all, to create a great art work, it still needs to be aesthetically pleasing, does it not?

One must always be able to accurately judge "what is beauty and what is good" with an instantaneous aesthetic intuition.

No matter how successful the work is, if this judgment is poor, it cannot be said to be excellent.

This judgment of goodness or badness, I think, depends on "aesthetic sense and aesthetic eye.

Japan's Shu Yamaguchi(山口 周) said, "If you have an aesthetic sense, you can avoid making mistakes in judging right from wrong in business and politics. With this in mind, large global corporations are now sending their executive candidates to study at art graduate schools." He claims.

This argument agrees with my current argument, doesn't it?

I still believe that companies send prospective executives to study abroad because they want them to "acquire an aesthetic appreciation for fine art and the ability to create fine art, which they can then apply to their lives in the business world.