Today I'd like to introduce some famous painters who draw with pastels.

The first one is Odilon Redon, the "Searcher of the Mysteries of the Soul.

First of all, the number of famous painters who paint with pastels is very small.

Why don't they all paint with pastels? There are a few famous artists who use pastels for studies and products, but even then it is a small number.

Rather, why don't you paint with such wonderful materials? I would really like to ask back.

As a result, most painters have been using oil paints, or alternatively, acrylics, which are fast-drying, realistic, and durable, have become the norm. 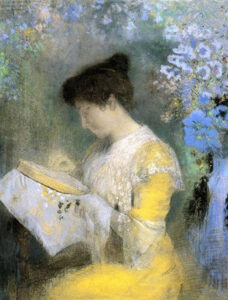 Also, pastels are not suitable for large paintings due to their weakness and delicacy, so they may not be an option.

However, in my experience, which painting medium a painter uses depends on his or her affinity and temperament, and I believe that pastel painters have an inborn disposition to use pastels.

When it comes to great masters of pastel painting, there are practically only two. Odilon Redon and Edgar Degas.

Both are painters of the Impressionist period, when Manet, Monet and Renoir were active.

Odilon Redon also painted in oils, but until he married at the age of 40 and had his second son at the age of 49 (his eldest son, Jean, died prematurely), he painted Flaubert's 'The Temptation of St. Antoine' in charcoal and lithographs, and other imaginary monsters, animals and plants.

The poet Stephane Mallarmé called Rudon's monochrome work "black as scarlet and majestic".
(Photo: lithograph from 'The Temptation of St. Antoine' "She takes a pitch-black sponge from her bosom and covers it with her kiss".)

When you see the original painting, you will realize that Redon's black is not dark, but black as color, and it shines beautifully.

There are only a few masters who can use black as a color, including Manet, Renoir, and in Japan, Sesshu (雪舟）and Yokoyama Taikan（横山大観）.

Even the great Wassily Kandinsky had trouble using black for a long time. 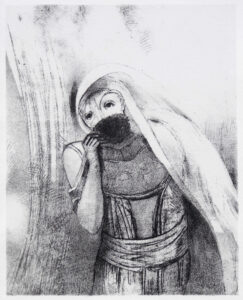 However, after the age of 50, Redon began to use mainly soft pastels to depict deep literary ideas in heavenly colors.

Perhaps his sexual desires, which had been suppressed by his mother's unloving upbringing, were unleashed and sublimated.

"In general, painters who are masters have outstanding qualities that can only be described as natural gifts". .

"Even if we think that there is something extraordinary in Redon's creativity, something truly genius in his ability to create such unimaginably heavenly flowers, we cannot deny the fact that he is a master". (ODIRON REDON, Kunio Motoe, みすす書房 Misuzu Shobo in japan, p 313)

I have tried to find out why Redon used pastels so much instead of oil as his main medium, but it is not clear.

He had originally used charcoal for a long time, so it may have been a natural progression to use soft pastels.

However, I think it may have been because Redon was devoted to Japanese art.

A researcher of Redon's said.

There is no documentation of his deep devotion to Japan. 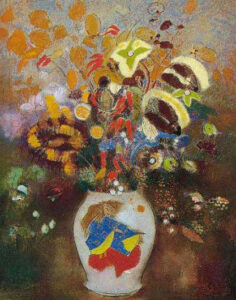 Odilon Redon's only connection to Japanese culture is that he mistook a figure in a Noh costume on a vase for a samurai （侍）and named it "The Vase with the Samurais" (photo). (Odilon Redon, Norio Awazu（粟津則雄）, p194)

This is what he said.

"Even so, I think there is no doubt that Redon is deeply referring to Japanese art".

Imaizumi（今泉）: "In Redon's writing, there are influences from Indian poetry, philosophy, and other oriental elements".

Umehara（梅原）: "I think there are quite a few oriental molecules".

Imaizumi "I wonder if (Redon's works) have something that resonates immediately with Japanese people".

Umehara: "Yes, It's good that he doesn't have any ambition to become famous or to surprise the world. I think it's very pure".

Actually, Redon did not have made that much noise in France yet. Japanese painters who went to France at a time when his reputation had not yet been established brought back a large number of paintings, many of which are now in Japanese museums such as the Gifu Prefectural Museum of Art（岐阜県美術館）.

The purchasers were painters from the Kyoto School of Japanese Painting（京都画壇）, led by Takeuchi Seiho, and included Tsuchida Bakusen（土田麦僊） for "Young Buddha" and Kikuchi Keigetu(菊池契月） for "Portrait of Wife. Chikkyo Ono（小野竹筒） also purchased a copy.

Magosaburo Ohara（大原孫三郎）, the founder of the Ohara Museum of Art（大原美術館）, and Torajiro Kojima, （児島虎次郎）who was entrusted with the purchase of works to be stored in the museum, purchased the works before the others.

It is remarkable that the Japanese had the foresight to recognize the true value of Rudon almost at the beginning. .

Norio Awazu wrote about this.

"The painters of the Kyoto School of Sketching, led by Seiho, attempted to revive the traditional decorative qualities of Japanese painting, which had lost their form, by fusing them with Western painting techniques".
(Odilon Redon). (Odilon Redon, Norio Awazu, p. 268)

"He was searching for a new line and form with spiritual expressiveness, not just decorative lines and forms."

Blessed with deep culture and musical talent, he is, so to speak, our Mallarmé

He is said to have been a great expositor, and Maurice Denis, a young painter of the Nabis school, said.

"Maurice Denis, a young painter of the Nabis school, said, "Blessed with a profound culture and musical talent, and with a friendly and kind personality, he was the ideal image of the Symbolist generation, our Mallarmé, so to speak."

The painters of the Nabis school looked up to Redon as their mentor along with Paul Cézanne. (Header photo Maurice Denis, "In Praise of Cézanne", Redon is the one explaining the still life painting.) 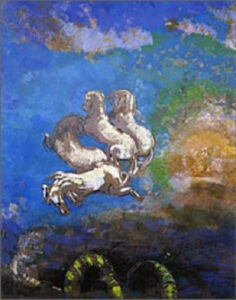 Rudon coined the term "suggestive art," and was a lifelong admirer of the musical state of painting and a pioneer in its exploration. He was a pioneer in the field.

In that sense, he may be considered a direct disciple of Eugène Delacroix, who said "Today's colors must be like a music".

Kandinsky and Klee, who were also aiming for a state of music in painting, did not inherit Rudon's studies, and in the end it was I, Masahiko Yokota, who took them over and completed them.

Rudon criticized Impressionists such as Monet and Renoir for their low ceilings because they were bound to depict objects, people and landscapes by looking at them as if they were cameras or videos.

This is a stereotype that many Amachea artists are still unable to break free from.

You can't make a leap until you get out of this mindset.

To make a leap forward, you should close your eyes like Redon, imagine and fantasize freely like a novelist or a playwright, create out-of-this-world characters, and try to express deep psychology, thoughts, metaphors, and poetry.

In other words, they should spread their creative wings and soar high, and the Impressionists who did not do so were called "low ceiling".

Both Redon and Degas used soft pastels on paper

As a matter of fact, the most popular of Redon's works among collectors during his lifetime were his works such as flowers in a vase.

This seems to have helped him a lot financially.

The flowers in the vase were cut and painted by his wife, Camille, who grew them in her garden, and Redon himself actively tended to the garden when he was tired from working on his paintings.

When you visit a museum, you will find that Redon's works are drawn on paper more thinly than you might expect.

This is also the case with Degas, but on the contrary, I tend to lay down very thick strokes.

Since pastels have a weak fixing power on paper, they cannot be lent out as aggressively as oils or acrylics.

Even at the Mitsubishi Ichigokan Museum（三菱一号館美術館） in Tokyo, you cannot see many of Redon's pastel works unless you are lucky.

In the past, Taro Okamoto's（岡本太郎） masterpiece, "Scars on the Once, when Taro Okamoto had his masterpiece, "Wounded Arm," torn to pieces with a knife by a young aspiring painter, he said, "All things are impermanent.

He said, "All things are impermanent, and all things perish, but this young man has a future, so I'm more worried about him.

That's why they express the rise and fall of things so well, don't you think?
The only place where you can see the works is in the local museum.

I think this is more in line with the way society is supposed to be rather than this way of life.

This is especially true in the current situation where we cannot even travel by plane in Corona.