Today, I would like to talk about the production method and production value of the giclee prints I sell.

In another page, I talked about "Types and Characteristics of Prints", but Giclee Prints are prints printed on paper, canvas or board using an inkjet printer.

The prints I produce in my studio at home are up to the size of A3 plates, and I use a CANON PIXUS PRO-10s printer to print them.

This printer is a pigment printer, and pigments are finely ground jewel-like rocks, just like the mineral pigments used in Japanese painting.

Since it is made of rock, it is resistant to discoloration by sunlight. The light resistance is 200 years according to the manufacturer.

If you are wondering why we use CANON printers, it was actually EPSON that took the lead in this field. 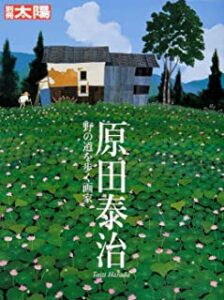 It was around 2004, when EPSON printed the work of graphic designer Taiji Harad in Japan(原田泰治）

I used the pigment printer PX-G5100 to take pictures of my oil paintings with a film camera, and scanned them with a CANOB GX-800 film scanner to create giclee prints.

At that time, Canon did not have a comparable printer, and they were struggling to develop one, so the release date was postponed many times.

EPSON and CANON have different inkjet systems, and EPSON uses the piezoelectric system, which gave it the overwhelming imaging performance at the time, but this system still has its drawbacks. However, this method still has a drawback.

It is no wonder that I chose CANON about three years ago when I took up the challenge of giclee printmaking again.

I chose CANON about three years ago when I tried my hand at giclee printmaking again, because CANON's technology had already matured and did not have the shortcomings of EPSON's piezoelectric elements.

For the choice of paper, we used paper prepared for the PIXUS PRO-10s from CANON, " Awagami Washi(阿波紙 和紙）", which is a Japanese paper that has been uniquely coated so that it can be printed on by inkjet printers. , and "Pictorico", a well-known inkjet printer printing paper.

As a result of printing on various types of paper such as Pictorico, which is a well-known inkjet printing paper, we decided to use luster because it has the most natural and faithful colors and can reproduce the power of the original image to the highest degree.

Luster is not a flat glossy surface, but has fine pores (dots) on the surface, which gives the printed work a matiere surface (matiere) as a print and an amazing sense of luxury.

Instructions on how to make Giclee prints larger than A4 size

For prints larger than A4 size, we commission a specialized company to produce them.

A typical supplier is "Graphic Corporation".

When you outsource your work to this company, you send them the data images for printing by e-mail and leave the production and delivery to them.

In the case of my work, I sell and send the same size as the original painting, such as 108cm x 75cm.

The light resistance and other qualities are the same as those of the small size.

This work also comes with a serial number and a certificate.

Of course, sales of my Giclee prints have been increasing this year, but they have finally come to be recognized as having asset value equal to or greater than that of ordinary prints. 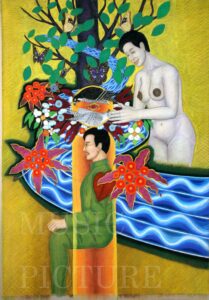 The reason why it sells well is partly due to the fever of buying and investing in contemporary art in Japan over the past few years, especially among IT industrialists, but also due to the self-restraint at home caused by the Coronation. Many people want to appreciate it by displaying it in their own rooms or now.

In fact, many people buy them as gifts for their children or relatives.

As a dealer, I am very happy to hear this.

The asset value of prints as reproductive art and

The asset value of prints, which are reproductive art, is explained in another article "The Asset Value of Prints as Artwork". As I mentioned earlier, prints, especially giclee prints, are selling very well. 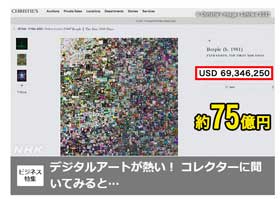 Naturally, this ownership can be resold, and it is also possible to incorporate a system that allows the original author to receive a percentage of the money for each resale.

In addition to NFT, a new service has emerged that allows multiple people to own a single painting or reproduction.

We are also trying to incorporate a service that allows owners to buy and sell among themselves. (See ""We want to make joint ownership of artworks take root", the idea behind Japan's first art platform "ARTGATE") strong>)

This is very similar to stocks.

NFT is made possible by the block chain technology that makes bitcoin possible.

Payment is not made in cash, but through a crypto asset such as Ethereum, which utilizes blockchain technology.

The block chain is a chain of certified documents to the property by the original owner who becomes the new owner through resale, and the cryptography makes it impossible to alter.

Giclee prints can also be seen as a shared ownership of the original work, right?

Giclee prints and the emerging NFT.

There may be new developments in the future.