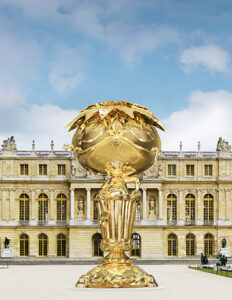 I'd like to explain how to appreciate and value contemporary art.

When I search for art on the Internet, I find the following

"I'm interested in modern art and I'd like to have a collection, but I don't know how to understand the contents”.

"What is so valuable about the works of famous artists such as Takashi Murakami and Yoshitomo Nara?
Why are they so highly regarded?

I don't understand why they are so highly acclaimed." .

It seems that there are many young people who say, "I don't understand why they are so highly regarded.

"What's so good about those anime-like works that don't seem to be particularly good even when viewed as animation?

I think this is how he has been described.

Ever since Murakami started gaining attention in the art world, there has been a constant battle between Takashi Murakami and young people who give his works low ratings, especially among young people.

Incidentally, I like and highly appreciate Takashi Murakami, Yoshitomo Nara and Makoto Aida.

Young people in their twenties and thirties may not understand this, but it is only in the past three decades that contemporary art has become a global boom and has become a mainstream art industry, It's been the last 30 years.in Japan. 。

Marcel Duchamp at a watershed 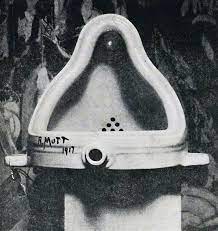 In his book, Takashi Murakami says that the following conditions are a must in order to create a work of art that will be recognized by the Western art world.

The dividing line between contemporary art and the art of the past is Marcel Duchamp's The Fountain (photo), a commercially available "hidden gold".

When Duchamp tried to exhibit this work in the "New York Independents" exhibition of the Society of Independent Artists held in New York in 1917, it was refused to be shown, and it caused a huge scandal when he became so angry that he wanted to resign from the chairmanship of the exhibition.

This led to a major scandal when he wanted to resign from the chairmanship of the exhibition.

It had an irreversible impact on the history of art.

What did this incident bring about?

"A work of art does not need to be bound to a canvas or paints. In principle, all kinds of freedom should be allowed in production. All restraints and preconceived notions should be rendered meaningless.

This is the recognition that

This is what Duchamp taught us.

Under the influence of Duchamp, Damien Hirst, who today is regarded as one of the top artists in the Western art world, produced his debut work, Shark in formalin, and Mother and child of cow cut in half in formalin, the debut work of Damien Hirst. 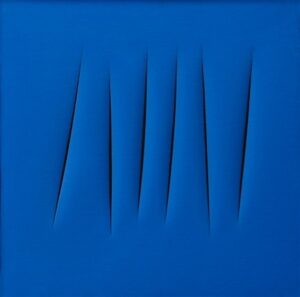 When I asked Hozu Yamamoto(山本豊津）, the representative of Tokyo Gallery（東京画廊）, to write a recommendation for my artwork

"I have always said to you, Yokota, that you should study Lucio Fontana carefully once again.

It's really an amazing and profound group of works”. .

"I think the same thing is true of Fontana's work with cut canvases as it is for Duchamp".

"I still cling to the genre of painting. There is no need for it".

I think he wanted to say that.

Takashi Murakami has also created many three-dimensional works, and so has Yoshitomo Nara（奈良美智）.
Banksy
Banksy, who is currently the talk of the town, has turned walls and streets into materials for expression. .

After Duchamp, when modern art boomed around the world in 1990, it was said that "the art world is now a flower garden where anything and everything is possible and unclassifiable.

This means that today, art has freed our brains from the chains of inflexible and rigid human thinking and preconceived notions, and has given us the ultimate flexibility to think and be totally free. In the past couple of years, the world has become a place where people can think more freely and have ultimate flexibility.

Especially in the past couple of years, the world's business elite have been attending art schools such as the Royal College of Art rather than MBA such as Harvard Business School.

In particular, in the past couple of years, the world's business elite have been attending art schools such as the Royal College of Art rather than MBAs such as Harvard Business School, and this is probably one of the reasons why.

In the last few years, the idea that "anything can be made and anything can be created" in contemporary art has been combined with amusement, entertainment, play, beauty, emotion, and fun and digital technology to create fascinating content that many people want to see, such as TeamLab's work.

It's a combination of amusement, entertainment, play, beauty, excitement, fun and digital technology.

This is what Wassily Kandinsky called

This is what Wassily Kandinsky meant when he said, "We must create an age of the spirit, a kingdom of the spirit, out of the age of capitalist shenanigans that play with matter.

This is a situation in which the era that Wassily Kandinsky described in his book "The Spiritual in Art" is really coming to an end.

I think we can say that the time has come for people in many developed countries to move away from the pleasure that things bring to them and seek out content that brings them spiritual pleasure and new awareness.

However, if everything is free, then every act in the world is "art.

So what is the difference between a work of art and other things?

Continue reading at "No2".