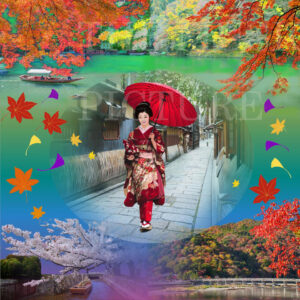 It is a picture completed on December 8, 2018
Because I used the common law of the picture and music that I discovered this time.
This is finished a art work that you can feel rhythmical and melodious emotion in a similar way when you listened to music.
This time I realized Music state of the picture that “京都慕情=The Kyoto affection” which is a hit song in Japan 1970 .
京都慕情=The Kyoto affection” was composed by The Ventures.
Aren’t you taken by the feeling that you are listening “The Kyoto affection” when you watch this picture.
In other words ,this picture is the art work which succeeded in integrating music and picture for the first time in the world.
By the way, this title is one second ago of the atomic bombing of Hiroshim

artyokotajp
最近書いた記事
October 26, 2021 - My new work is ready. The title is "War with Dualism".
This is a drawing of a new work that I have been working on for a while. I'm going to start drawing it with painting software.
【About My Resume Introduction】 How a genius boy of painting was recognized as a "world-class talent" by Japan's leading contemporary art dealer.
February 11, 2021 My latest picture has been completed. The title is “God is Dead! “

Follow @masahikoyokota1
おすすめの記事
This is a drawing of a new work that I have been working on for a while. I'm going to start drawing it with painting software.
I haven't decided on a title yet, but I'm going to call it "Dualism: ...
Translation possibility of each art field
For example, so that a picture and music are so,each field of the art ...
The longer you live, the more shame you suffer
This title is the words that was wittren into the book of Chuang-tzu ...
I met Mr. Hozu Yamamoto(山本豊津) who is a Representative Directors of Tokyo Gallery【My History No4】
Tokyo Gallery is a first Japanese contemporary art gallery , it is rep...
High school days  Art teacer said “I found a genius painter at last today【My History No2 】
I choose industrial arts class by the club activities of the high scho...
Artists, art dealers and curators. Theaters and other art professionals still don't know for what reason abstract painting was invented.
If you're a native speaker of a language other than English, you shoul...
What is an common scientific law between music and pictures?
If you're a native speaker of a language other than English, you shoul...
October 26, 2021 - My new work is ready. The title is "War with Dualism".
I am embarrassed to say that I am a slow painter when it comes to pain...
ONLINE SHOP
CONTACT
Let`s Try・・・High-performance translation software using AI