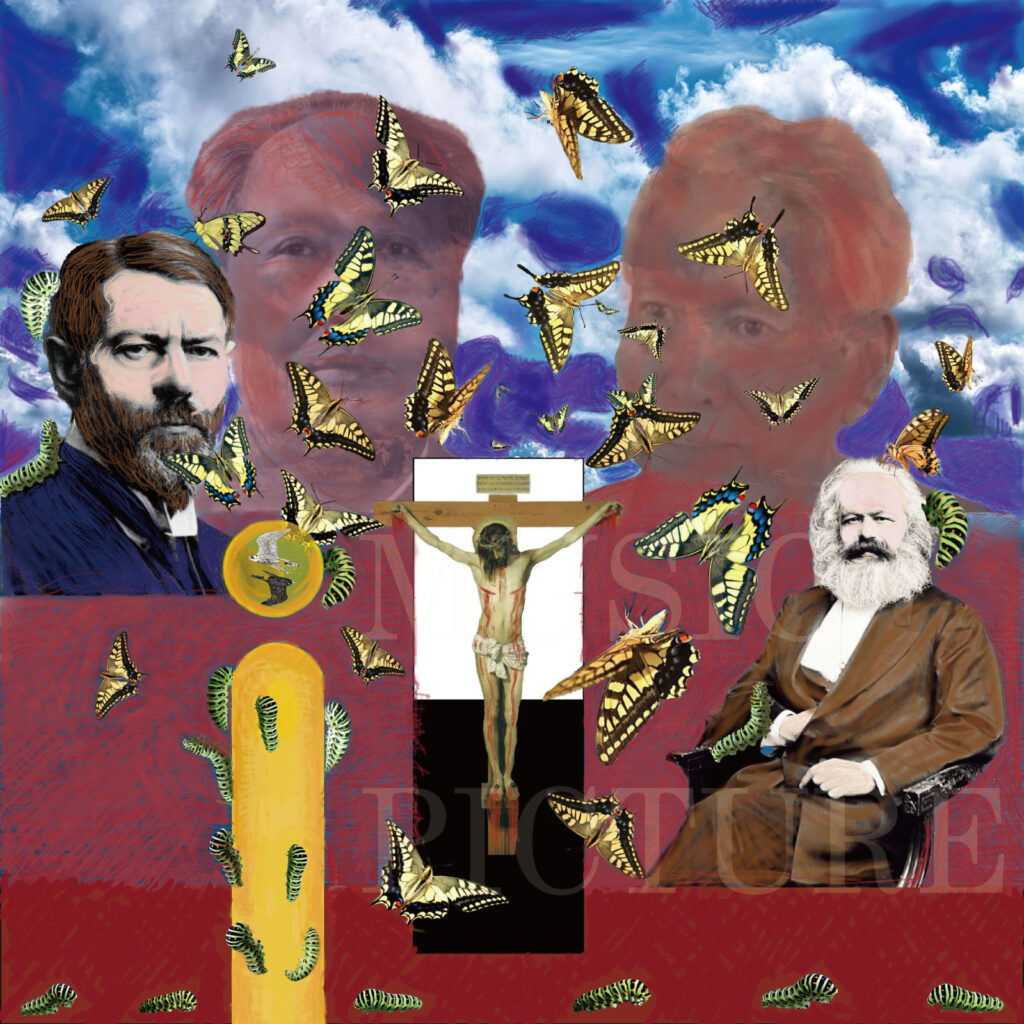 I am embarrassed to say that I am a slow painter when it comes to paintings.

In fact, I've been working on paintings for more than ten years now, and I've never had any trouble coming up with ideas for my paintings.

But that's a bit of an excuse, isn't it?

I have the time.

So, I have already started working on my next project.

In the past, I was taught this in a university course called "Vocational Guidance".

"It is said that the 20th century was a battle between three scholars, isn't it? Who are they? Yes, Karl Marx for scientific socialism, Sigmund Freud for the discovery of the unconscious, and Darwin for the theory of evolution! .

I had never heard of them before, so I remember being a little surprised that my friends in the class room knew about them as a matter of course.

Akira Asada(浅田 彰）, who was once hailed during the bubble era as the "new breed of humans（新人類）" in the Japanese mas media is now a professor at Kyoto University of Arts（京都芸術大学）, wrote in the chapter "Books to Read to Plunge to the Forefront of Knowledge" at the end of his book "Fugitive Theory（逃走論）.
.
It egins with the question, "How can modern thought overcome dualism? Let's start by reading "Bow and lyre" by Octavio Paz, a South American poet! .

Do you know what that means?

Well, I guess you that the subject of this picture is exactly the same as this phrase.

Now, on the left side of the screen is Mao Zedong, the founder of today's China.

A while ago, someone said "Humans are the only animals that kill their own kind on a large scale", and he is right.

Because in chimpanzees, one male dominates all females and only he can have sex.

The other males may have become violent due to constant and chronic sexual frustration. That's the idea.

Freud's theory that sexual frustration is at the root of all mental illness still has a strong presence in the world of psychiatry.

There is an ape that looks just like a Pan troglodytes the Pan paniscus.

The reason for this, they say, is that Pan paniscus share females with males so that they do not become frustrated.

In the past few years, TV and weekly magazines have been blaming celebrities for their infidelities in japan. I think behind it all lies the dark frustration and jealousy of Japanese men and women.

Anyway, from today, this work will leave my hands and go on with its life as a work of art.

Therefore, the meaning of the work will also change depending on the viewer.

artyokotajp
最近書いた記事
The value of etchings, lithographs, and giclee prints as works of art. Where can we buy prints with asset value?
October 26, 2021 - My new work is ready. The title is "War with Dualism".
This is a drawing of a new work that I have been working on for a while. I'm going to start drawing it with painting software.
【About My Resume Introduction】 How a genius boy of painting was recognized as a "world-class talent" by Japan's leading contemporary art dealer.