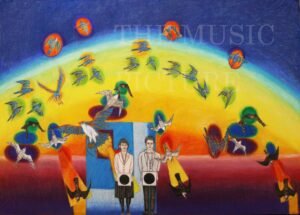 For example, so that a picture and music are so,each field of the art may say that each existed independently basically,While it is mentioned certain association

But all art fields express the same contents,Eeach field only has the strong and weak points of medium of expression. But at last,I discovered an existing common scientific law between music and pictures by a longtime study. This epoch‐making discovery is the first time in the world I applied myself to the study of popular music. As a result I succeeded in expressing rhythm, melody, musical scale, dominant note by a picture.

When it comes to this, one artist draws a novel and make a poem from the novel,and add music to poem, and translate it to picture. On the contrary, a painter can translate a picture into poem and music and a novel. This is historical big innovation of the art.

When you appreciated my recent work of art , you will feel rhythm and melody such as the music ,and a poetic sentiment. But it is caused by the progress of these production theory.It is because I am using this theory with my recent pictures